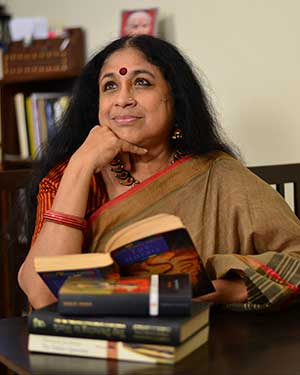 Gowri Ramnarayan is arguably by far the best candidate for the task of translating Ponniyin Pudalvar, this exceptional biography of Kalki, the leading Tamil novelist of the 20th century, by Sunda.

Ramnarayan, Kalki’s oldest granddaughter, is a critically acclaimed biographer herself[1].  Like Sunda, she too brings a rare objectivity to her writing; brought up in the rarefied home atmosphere of Tamil literature wrought by the Kalki legacy, she immersed herself‒ as an academic‒ in the magic of English literature and Indian and western aesthetics.[i][2]

The result of this revisiting of Sunda’s magnum opus long after his passing is a rich admixture of an intimate knowledge of the protagonist that places his life of literary excellence, patriotism, and sacrifice in the context of India’s freedom struggle and an inquiry into his close association with some of the giants of the movement. While it stands out for its rigorous research and fact-checking. it is also a scintillating read, a page-turner no less engaging in parts than a thriller.

Playwright, theatre director, journalist (formerly Deputy Editor, The Hindu, now freelance writer and translator), Dr. Gowri Ramnarayan is known for her evolved sense of aesthetics and deep scholarship. Also a trained classical musician, she was vocal accompanist to the legendary musician MS Subbulakshmi for well over a decade.

In her stagecraft, Dr. Ramnarayan uses modern techniques steeped in Indian culture – but anchored in a global context.  Her multi-genre texts with music, dance, and the visual arts, explore historical, political, and literary pasts, to represent the complexities of modern life. Her plays have been staged in major Indian cities and national festivals and toured the US, UK, and South East Asia.

Her Dark Horse, with bilingual poet Arun Kolatkar for protagonist, won two national awards, while Night’s End was selected for dramatized reading by Swedish actors at a playwrights’ conference in Stockholm (2013). Night’s End was also commissioned for a week’s run at Soho Theatre, London (2017). She received the Nataka Choodamani Award for excellence in theatre from Sri Krishna Gana Sabha, Chennai.

[1] Author of MS & Radha, a biography of MS Subbulakshmi, and principal contributor to Song of Surrender, an anthology of writings on MS Subbulakshmi.

[2] A gold medallist of Osmania University for her exceptional performance in her MA (English), she later obtained a Ph.D. from Madras University for her thesis titled The Role of Emotion in Art, a comparative study of western aesthetics and India’s rasa theory.