as told to Chennaibest.com by his daughter Anandhi Ramachandran. 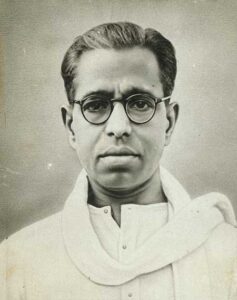 There are several things I remember well about my father. His sense of humour. We always looked forward to his coming back home from office, because he had so many interesting things to tell us. But when he used to write, we never used to disturb him. Our mother had trained us that way; that we should not make a noise, when he was writing. Even at that early age, we had immense respect for him. He used to be very affectionate towards us. Whenever one of us was not well, he would sit next to us, and do his writing. He would never leave our side. Now-a-days people speak about “quality of life”. We had that in our home. Back then there were no telephones. Whenever he was late, he would send us a note through his peon, asking us go to sleep, as he would be late that night. He knew that we would be waiting for him to come back, tell us a story and put us to sleep, so he would send those notes.

In spite of all the work that he had, he was a writer, movie-critic, music critic, he used to write about dance and so many other things; he would still take care about what’s happening at home. I still wonder, how he knew so many things, because, today there are lots of opportunities to learn many things, but back then, there were none, yet he had knowledge of so many things. Probably because he had a natural ability to grasp and appreciate things. And for that we had deep respect for him. He did not even pass his SSLC (Senior School Leaving Certificate).

He was born and brought up in a small village called Puttamangalam, 10 miles from Mayavaram, and he had long hair at that time. When he came to Madras, he cut off his hair, and it was talked about as a serious crime in our village. In spite of being brought up in such a circumstances, he propagated khadi, prohibition, abolition of untouchability and women’s liberation.

When he was imprisoned, my younger brother, my mother and I used to stay with our Periappa (father’s elder brother) at Puttamangalam. At that time he had arranged for a dance teacher, Subramaniam Pillai from Pandanallur, to teach me dance. Subramaniam Pillai used to travel seven miles in his bullock cart, teach me for four days in a week, and on the fifth day, he used to go back to his village. Since my aunt was very orthodox, my mother had the responsibility of cooking for my teacher and his bullock cart driver. She also used to take care of the bullocks, and she used to do that with a lot of enthusiasm, without making much ado, as those were my father’s wishes. People in our village were amazed that anybody could go to the length of arranging firstly a dance teacher, and that too from a different village to teach dance to a little girl. So these things were very new in the Agraharams (a Brahmin’s locality) of those days, and he was brave enough to do all that. 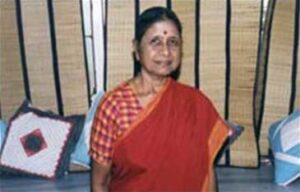 Though we did not understand that he had these progressive opinions, we could understand to some extent that he was doing something great, involved in Gandhiji’s movement, serving the country. He was also a staunch follower of Rajaji’s principles. He started a magazine exclusively for the cause of prohibition. Right from the lead lines to the back cover, it was totally devoted to prohibition. It was called ‘Vimochanam’. It was run from a Gandhi Ashram in Trichy. He used to write short stories for this purpose. If you read his book titled, ‘Banker Vinayakrao’, its very interesting. Even those stories will have a surprise ending.

He was criticised for being a propagandist. Many people did not accept him as a literary writer. Even for this criticism, he wrote an essay on the coming of spring, which goes like – “Spring has come, flowers are blooming and the bees are drunken…” so on and so forth. After a description of Spring, he addresses the reader thus: “For this season, wear Khadi clothes and learn to spin yarn…” and then he goes on to say, “Oh! I started this essay with the description of Spring and now I am finishing with propagation of Khadi. This is not very literary”. And the punch line of the essay is ‘This Spring, everybody wear Khadi clothes’.

But he had the courage of his convictions and he stood by his principles. He wondered what was the use of writing, if it did not help society in any way.

So the major issues he dealt with were propagation of Khadi, prohibition, propagation of the Swadeshi movement, propagation of the arts and crafts of Tamil Nadu, abolition of untouchability, women’s progress, (they did not use the word ‘liberation‘ in those days because, back then, women were so backward, they did not have a right to education. They were not allowed to voice their opinions). My mother was not educated, and after getting married to my father, when he found this out, he was shocked. He then said, “Its not your fault that you did not go to school, so if you do not mind, I will teach you at home, you can learn to read and write even now”. The same day, he started teaching her. Subsequently she went to the extent of writing short stories herself. So he was not merely preaching about women’s progress, he started it at home. He educated his wife, he made me learn Bharatanatyam, the veena, classical music, and I was anyway going to school.

Kalki wasn’t just a patriot and a literary figure. He wanted everyone, even the common man to know, understand and enjoy Tamil literature. His magazines did not only carry stories, he also used to devote space for a critique of some literary work. I think it was one of his great achievements to reach Tamil literature to people who would usually not have read them. 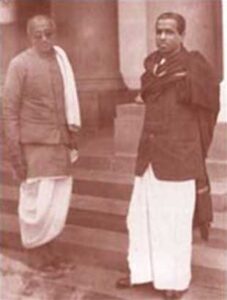 He was imprisoned; the first time for one year, than for six months and then for three months. He had written a book titled, ‘Moondru Matha Kadunkaval’ (3 month’s rigorous imprisonment). Only if you read it, you will know how humorously one can write about life in prison. He has written about all the people who were there with him in prison. He was in prison along with people like Muthuranga Muthaliar, Rajaji and K. Santhanam. Even water scarcity in the jail is written about humorously. They used to serve only Radish Sambaar everyday. He says – “One day we have Radish Sambaar, the next day Radish leaf Sambaar, and the day after we have Radish Root sambaar…and the last day we have Radish-fragranced Sambaar”. So in every situation he will see the funny side to it.

Even the difficulties he underwent during imprisonment he has written about funnily. So one never felt that he was away from his family, suffering and sacrificing for the country. One more thing is, they never spoke of their sacrifices as something great, because that is how they were, they did not know to lead their lives in any other manner. Their lives were very simple and they had a sense of fulfilment in their lives. They never felt that they wanted this or that, and so they were never disappointed. They were contented being with their friends, talking to them and taking care of them.

The origin of his pen name – Kalki 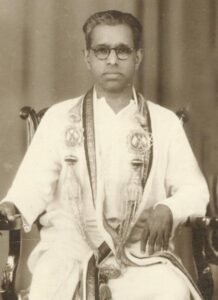 The reason for his taking ‘Kalki’ as a pen name was based on the myth of the ‘Kalki Avataram’(the final incarnation of Lord Vishnu, in the age of Kali). Through his writings, he wanted to bring about change in this age. Another reason was, he used to work for Kalyana Sundaram Mudaliar,who was at that time running the publication called ‘Navashakthi’. He learnt all about how to run a publication from him. Kalyana Sundaram Mudaliar, was also a great patriot, he had worked for the cause of workers. As my father was his great fan, he took ‘Kal‘ from his name and added the ‘Ki ‘ from his own name (R Krishnamurthy) and made it ‘Kalki’.