Performs abhinaya to a song by Kalki Krishnamurthy from the novel Sivakamiyin Sapatham,
Sung by
AMRITHA MURALI 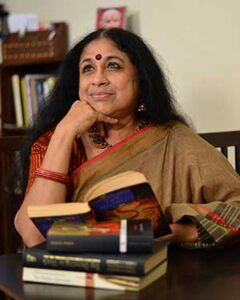 I begin by saluting two great gurus of Bharatanatyam, SK Rajaratnam Pillai, and Kalanidhi Narayanan, who gave Priyadarsini Govind the kind of training that made her one of the best-known artists of Bharatanatyam in India today. They also gave her the confidence to be her own person, rooted in tradition, but adventuring into new choreography, teaching dance, but also training dancers to expand their boundaries with her Navadarshana initiative.

And what joy to introduce Priyadarsini Govind as Sivakami, a beloved character in Kalki Krishnamurthy’s magnificent historical novel about a court dancer in 600 CE! 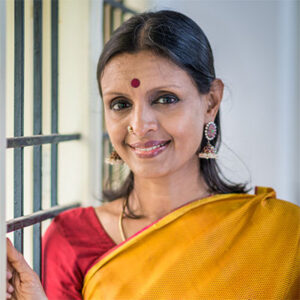 Priya first became Sivakami as an actor playing that role in a play based on Sivakamiyin Sapatham that I wrote and directed way back in 2009. Those who saw the play were stunned by her acting abilities. And in the play, she also danced as Kalki’s character, to a song written by Kalki for that character.

That is the song you will see her perform now.

And let us not forget that we have another Sivakami here, an unseen Sivakami in Amritha Murali.

Amritha is an exceptionally gifted artist. Trained by a who’s who of experts from grand schools of Carnatic tradition, her music is an amalgam of fidelity to classical values, delightful creativity, and flawless presentation. Amritha is also a violinist of repute. This additional skill augments her multi-dimensional understanding of her art form. She creates an entire range of emotions with her wonderful singing of Kalki’s song.

A young girl in love with the handsome, valiant god Muruga, sees a peacock ambling in the garden. The girl asks the bird, traditionally associated with Muruga as his mount, “O blue peacock, tell me, will he who promised never to forget me – actually forget me? Doesn’t he know that I am yearning for him? That my life is ebbing away without him?

Here I am languishing in pain. and there you go practicing the gait of the swan! Have you become drunk with arrogance because the lord rides on you? Instead of making straight for him and delivering my message of love, O you stupid creature! You have lost your way!

Have you so much venom in your heart? Have decided to take revenge on me? Have you fallen asleep on the way? True, I have dared to fall in love with the magnificent son of a peerless God. But O you beautiful bird, won’t you have some pity for me? Won’t you show me some kindness, some mercy?”