Usually, those who address meetings are introduced with the words “It gives me immense pleasure to introduce the speaker of the evening.“
Today the words are no mere formality. It does indeed give me immense pleasure to introduce Mr R Seshasayee to you.Mr Seshasayee did try to do my job for me. He said, “The standard introduction is useless in this case.  Please introduce me as a student of literature, music and science, and a diehard fan of Kalki!” 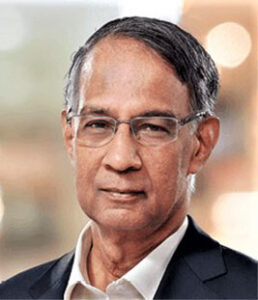 Well, we cannot completely overlook the fact that Mr Seshasayee is indeed one of the most important business leaders of modern India. I mention only three of the many top-level positions he has held -he served as the managing director of Ashok Leyland, Chairperson of Infosys, and President of the Confederation of Indian Industry (CII). While the fact that such a person has authored articles on economic issues for national English dailies would be no surprise, you will be happy to know that he writes in Tamil as well, not just learned essays but also short fiction. Another intriguing tidbit is that Mr Seshasayee has received regular training in Carnatic music. What makes Mr Seshasayee truly special in our context is the fact that his parents were the close friends of Kalki Krishnamurthy, the protagonist of the biography I am translating for this project.

Mr Seshasayee’s mother, Vasumati Ramaswamy, was a writer who was introduced and encouraged by Kalki Krishnamurthy. His father MS Ramaswamy, a banker by profession, but an expert in history, assisted Kalki in editing Kalki’s first historical novel Partiban Kanavu, and ensuring there were no anachronisms in it. His parents also gave some invaluable information about Kalki to the biographer Sunda. Not just facts, but about sharing some very striking, even moving moments in conversation.

Just one more thing – Mr Seshasayee called himself Kalki’s diehard fan. I know for a fact that this is no exaggeration. In 1999, Mr Seshasayee came to attend Kalki’s centenary celebration. He was well on time, but there was absolutely no place in that big theatre, not even on the floor or the aisles. My mother spotted him at the back, somewhat squashed against a wall I think. She ran to apologise, “I’m so sorry that you have to be standing!” Mr Seshasayee replied, “Standing? No! I’m not standing! I’m floating in the air!”
Need I say more?